Update 2015-07-29: It has arrived! Naming it was tough; although there were good suggestions that friends made. I considered calling it “theven” given the previous one was called “sith”, but I’m going to go with “Gillie”. I like the ring of it principally, but there are other meanings. It’s the name of a character in GoT, and in French it means “tickle”, which was in the list I considered.

“Gailuron”, “Melina”, “Abraxas”, “Eloah”, “Precious”, “Phoenix”, “Sith”. I have not followed any particular convention in naming my computers, thus far. Here are the stories.

“Gailuron” (namely “cheerful chap”) was a sturdy Sun workstation which I had not named myself. It was there when I was sworn into office at W3C in 1999.

“Melina” was a sturdier desktop computer, I don’t recall which make. I named it after a most excellent Greek singer, Melina Mercouri. At the time, I was dating a guy who was half-greek, I danced the sirtaki (or rather the hasapiko -the butcher’s dance-, which inspired the sirtaki), cooked greek food, vacationed in Crete every summer, listened to orthodox liturgical music and other Greek music, particularly Melina Mercouri. You know, Zorba? She sang to the famous Zorba movie music.

“Abraxas” was a heavy Dell Latitude laptop which I had not named myself. I looked up “Abraxas”, and it’s related to ancient religions. If you look it up, you’ll find that Abraxas is both an Egyptian god and a demon, and you’ll see that he has legs like pretzels, carries a whip and a shield, and has the head of a chicken.

“Eloah” was a Dell OptiPlex, a desktop computer that I named after Éléa, the main character of a wonderful novel by René Barjavel, The Ice People (“La Nuit Des Temps”). I don’t recall how I went from Éléa to Eloah, which I find is a Hebrew word for God.
In this photo, it’s hidden under the humongous monitor and behind a screen of paper in the office also known for its “1-million dollar decoration” (that would warrant a post of its own):

“Precious“, ah, Precious… My first Macintosh laptop, a 15-inch PowerBook G4. It took me so many months of relentless persuasion and negotiation before it was finally ordered, that it was only natural that it should be named the Precious. I loved it. I could sleep with it.
Incidently, in this photo, it’s in bed with me: 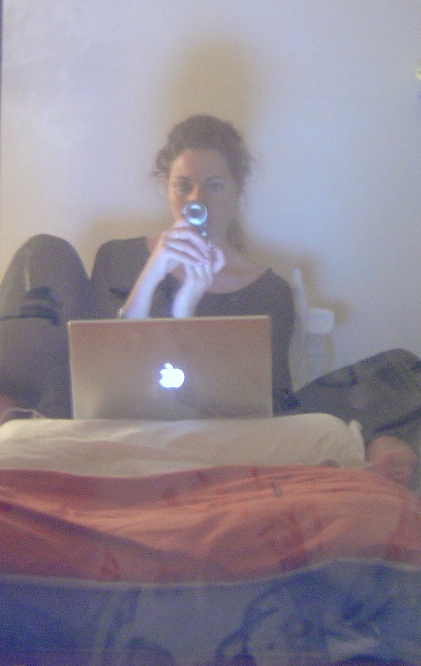 “Phoenix” -how could I forget Phoenix?- was the new Precious since on an unfortunate day in late 2006, Precious didn’t wake from sleep. Fortunately, I was in Boston, a short distance from the Cambridgeside Galleria Apple Store where I got a 15-inch MacBook Pro. It was entirely grey. And it was as pretty as the Precious. So I named it “Phoenix” after Jean Grey from the Marvel comics. Because it was grey and because it was sort of arising from the ashes of Precious.

“Sith” is the computer I’m typing this on, a MacBook Pro (15-inch, Mid 2009). I named it Sith because it had a dark keyboard. I hated it; it looked and sounded ugly. I had been able to get a glossy screen (versus glass), but there was no other choice than the loud new black keyboard.

I can’t wait to replace the venerable Sith, and wonder what I’ll name its replacement, another MacBook Pro (Retina, 15-inch, Mid 2015).

What do you think? Cancel reply

I am Coralie Mercier. I share thoughts and experiences, mostly in English, sometimes in French, and mostly about work related discoveries, drawings, musings and sometimes rants.

My day job is Head of W3C Marketing & Communications. I do not have a night job.

Writing is harder than photography.